“Today I’m extremely happy that after 5.5 yrs, I’ve placed my feet on my land, in my country. … I’m still unable to believe, I still can’t believe that this is actually happening. This is actual. In the past 5 years, I’ve dreamed that I would be able to set foot in my country. And I’ve always dreamed – if I’m in a car or plane, and I see the cities of London and NY, and I’d say [to myself], ‘just imagine you’re in Pakistan. Imagine that you’re driving in Islamabad. Imagine this is Karachi. It was never true. And now I see it, I’m very happy.”

Like NRA gun nuts who accuse Parkland kids of being paid actors, Malala-haters call her a “western stooge” because she almost died and now she’s in England.

I get it. When you’re desperate and struggling to make it in a dog-eat-dog world, and someone seems to make it (“woo-hoo, all she had to do was get shot and facial paralysis and exile? Gimme some”), the bile tends to pour out. But upwardly mobile city dwellers fighting to get their little girls in the private English medium-schools really should not be scolding Malala to shut up about girls’ education. And many of the little girls and boys who have grown up in those private schools have come to vent that bile on Twitter too. Check your privilege.

But Western imperialist power politics & terrorist politics are not her fault. The clumsy ratings-grubbing practices of Pakistani media are also not her fault. Sorry you’re sick of celebs falling over each other to fawn over her and get a picture taken with her, but that’s not her fault either.

This is the human cost of becoming a warrior for girls’ lives in the context of a global conflict, where the issues become entirely tangled with larger interests. Where your body becomes a symbol on all sides. You become a symbol of imperialist Westerners and their military adventures, and you become a symbol of the ‘good muslim fighting Our war against brown men.’ In this world where people erase girls, and there are only binaries, Malala has actually worked extremely hard against these binaries, to refine a balanced policy discourse, despite her youth.

Be safe, Malala. May God grant you a happy life.

If anyone posts crap in the comments, I’m deleting it.

And the last scene features cheery music as the DiMeos and Kenneth sleep on their furniture in the yard under the stars, as they are being evicted from their home. The DiMeos are now homeless.

It’s a supposedly funny scene, but it reduced me to a blubbering mess.

“They’re homeless,” I wept, running to my husband. “They’ve been evicted. It’s not funny.”

Normally, he would smile and shrug at my easy-to-tears tendency. But he did not.

We both know that though we work and have worked all our lives, this does not protect us – and our child – from a devastating downfall.

A single catastrophic event, or illness, can push us off the cliff with ease that is terrifying for me to consider.

Here in America, you can be working non-stop for decades, and a single event can reduce you to a downward slope, that can destroy you. With your kids, and your years of slogging away for a paycheck, homelessness is not a distant prospect for middle class people like me.

“When I think about how this is not that far from the realm of possibility,” he says, “it makes me want to leave this country.”

I saw what cancer did to my life. It reduced me physically on many levels to a state that I now wrestle with. I find little support for this at work. I dot every i and cross every t, but there are sharp eyes watching for the slightest sign that I might drop the ball. So I have found ridicule and impatience.

No matter: it’s just ‘business’ for a supervisor. They’re just trying to see if they can push me out and save a buck. Or put me on a part-time salary and save a buck.  They weren’t happy when they failed to do that.

I also saw what a first-time dysfunctional workplace did to my career trajectory. With radiant hopes, I started the tenure track, and slammed into an entire team of toxic employers and colleagues.

Perhaps cancer would slow them down, I thought. But it only fed their vampiric appetites. Like sharks, they only circled me faster in the water, and closed in on me faster.

I find myself now in a state of employment uncertainty. A scene like the DiMeos homeless in the yard is not something I can laugh about.

It is a scene from a nightmare.

We are at this moment living in an expensive rental apartment in Chicago.

Why don’t you live in a cheaper district, you ask. Well, it is in an expensive Chicago school district – because good CPS schools are hard to find – where affordable apartments are even harder to find. People don’t move out of this district until their children graduate from Grade 8.

And now, our landlord is selling his house, so we have to move within 5 weeks. We scrambled to find an apartment at short notice, and found one that’s even more expensive.

We keep spinning our wheels, hoping to put together enough to buy a house, and the money keeps going down the drain on rentals. Because we must live somewhere. And the choices are few.

Now, my employer tells me there’s no guarantee of employment past a year, or even a few months because of financial issues. Meantime, there is money for administrators’ large salaries, and even a new one.

“There are many other new PhDs who’d be happy to serve here,” I was told once.

I have poured heart and soul into my work and my students. Though I do say so myself – as do my students – no one can cast doubt on the excellence of my teaching and my contribution. I’m present for every meeting, every bit of service, every TPS report, every training – but I get the same precarity as I would if I did the absolute minimum and thumbed my nose at my superiors.

So if I lost this paycheck today, what would happen? I don’t know.

I’ve been relatively secretive about these struggles because, in this individualistic society, where success is worshipped, it’s embarrassing to show failure.

Yes, even though you’ve read quite a bit in this blog, I actually haven’t said much at all.

It is embarrassing to be a faculty member who is treated as dispensable.

One thinks, is it my fault? And there is no dearth of tenured professors who say, Hmmm, could it be your fault? Could you have tried harder? Published more from the chemotherapy room? Negotiated a better teaching evaluation? Tried to get along with the racist coach-turned-department-head? Could you have put your foot down and said, I will not be laid off? Could you have been alert, and figured out that the poet-dean was lying to you when he told you everything was fine and you were doing great? That he actually knew he was going to kick you out to the curb within a few months? Could you have sued them? Could you have applied for jobs in WhiteTown, USA (again) and at least have job security – even though you’re much too brown and Muslim for this job security?

It is so easy for people to blame failure. Because it is comforting to think, I earned all this myself.

At this moment, millions of us respectable middle class people live on the edge of homelessness and penury. We order peapod groceries, we drink organic milk, we send our kids to a good school, and we hope that next year, we’ll be in a house still. Next year, we’ll still be eating decent food, sending donations to Syria, watching the occasional movie.

With a single catastrophic event, we can fall into a terrible cycle of desperate poverty. No matter what we do. Because in this country, there’s no helping hand, no social net. Just ridicule and self-congratulation.

And there’s nothing funny about that at all.

I don’t often back kickstarter initiatives, but I backed the Logical Fallacy card game. I have bought and used the Logical Fallacy poster before, and now I’ve got two sets of Critical Thinking cards. Check them out. It’s a good game, and a great way to teach your children, students, friends, and family the foundations of critical thinking. In their next edition, I hope there are women philosophers in the cards. 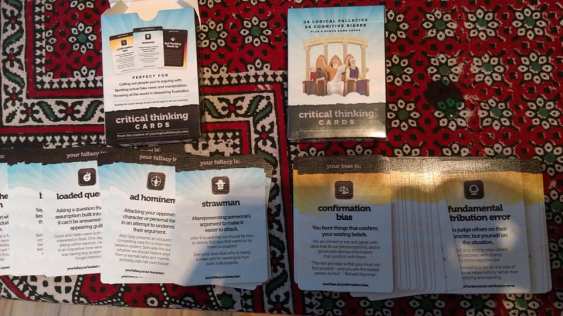