So an American (who else) dad’s little 7-year old girl turned to him and – probably fresh from a heavy diet of Disney princess movies – asked him if she’d ever be a real princess. Naturally. We consume the world. We are entitled to whatever our hearts desire, no? So 38-year old Jeremiah Heaton was, apparently, “faced with a dilemma.” Is she going to be a princess? No. Dammit. That’s going to screw up her life entirely. If she can’t be a princess and rule a country, that’s going to break her precious heart. What shall I do? I’ll make her a princess and serve her up some land to rule and own.

So he did some research. Unfortunately he can’t own Antarctica because of a treaty. So he found Bir Tawil between Egypt and Africa, and decided it was his because he said so. Princess Emily gets the worst birthday present ever: “officially the most undesired territory in the world.”

Jeremiah Heaton is not some ignorant racist, he protests: “What I am doing is the exact opposite of colonialism,” he says. “The dictionary defines colonialism as one country taking control of another to exploit its resources or people. Bir Tawil is not a country, it does not have a population, and I don’t represent the United States or a corporation. I’m an individual, and I’m not going to dig for diamonds or drill for oil or build a pipeline. What we’re doing is designed to improve people’s lives.”

Right. Because the East India Company went in to India announcing: ‘Listen up, Hindoos. We’re here now. We’re going to grab all your pepper and sandalwood, and leave you with nothing because, as bandits, that’s what we do.”

Heaton says his endeavor has been actually completely misinterpreted. He’s not trying to grab a land and make his daughter a princess. No, not really. “I’m not trying to entitle them [my children]. I’m trying to teach them about how to help others, and work in the service of others. If anything, I believe it will help them to be more humble.”

You’re going to hear it soon enough from those who really get Heaton’s burning love. So hear it from me. “Why does the Princess of North Sudan get y’all so riled up? It’s just a symbolic act of love. Isn’t a daddy’s love for his little princess universal? Wouldn’t all of y’all want to offer up a real tiara to your little princesses? Why does it have to be so goddam political? Why don’t you all just calm down and wipe a tear for little Emily and her love-crazed dad?”

Well, here’s a question for you: why does all of your human drama have to use our lands as backdrop? Why does your courage, covert intelligence, adventure, military power, ingenuity, resistance, liberal generosity, romance, all have to play out with a wise black man servilely admiring your fortitude or a mysterious Japanese woman (to be bedded of course) looking on in fascination? If we figure in your narratives, why do we always have to serve your fatherly love? Why are we the land, the backdrop, the sidekick, the servant, the ally, the enemy? Why are you always the subject and why must we always figure as the exotic furniture in your tale? Why must we – most insulting of all – serve as a means to bring out your “altruism” and “humility”? How about practicing your altruism and your passion for humanity in Baltimore? How about feeding the 20% of American children who live in poverty? California needs your help, Heaton: take your plans to the 23.5% of Californians who live in poverty. Take your plans and your crowdfunding home. The world has had enough of serving as a stage for your claims, your flags, and your human-interest drama. 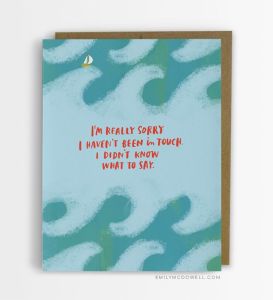 Emily McDowell, cancer survivor, designed a “series of Empathy Cards—emotionally direct greeting cards that say the things she wanted to hear when she was ill.”

Cancer terrifies people. A cancer patient terrifies others. The sight of a bald, pale, hairless person strikes fear into others’ hearts. Worse, friends and loved ones struggle to deal with the cancer patient.

One thing that this article, How Joint Appointments Stall the Careers of Ethnic Studies Professors, does not comment on is that tenure track faculty with joint appointments aren’t always seen as traditional faculty. As marginal insiders, foreigners, so to speak, they are at risk of not having the usual department protections.

Though I was in 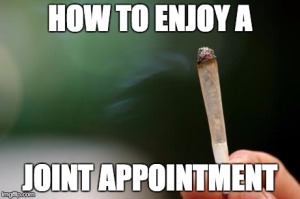 Anthropology/Sociology and Global Studies and not Ethnic Studies as such, I experienced this at Millikin University. I do ethnic studies, and I am ethnic, so in a heavily-white faculty, I’m practically Ethnic Studies.

Since I was escaping a situation where I had felt incredibly vulnerable to vipers and suchlike, I desperately desired safety. I had thought that being part-General Education Coordinator and part-faculty would mean additional layers of protection. Instead, Arts & Sciences appeared miffed that “their” position was “taken” by Academic Affairs. The Dean refused to properly process my annual evaluation paperwork until the Faculty Council pressured him to do so – after a year of me asking politely and wondering what was happening.

Joint appointments can work but, given academic politics, they follow Murphy’s law.