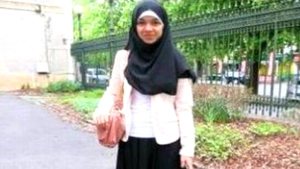 I awoke to the hashtag  #JePorteMaJupeCommeJeVeux because a 15-year old French Muslim student was sent home for her long black skirt. Apparently her skirt proclaimed her religious affiliation too “loudly.”

The Twittersphere wants to know if Elsa is Muslim and why do Cinderella and Ariel get away with their long skirts, when a Muslim girl infects a long skirt with Muslimness? Since when does feminist empowerment demand controlling female bodies and their clothes?

At the end of the day, France – as in the Charlie Hebdo affair – falls prey to racism. They think we can’t see the silhouette of Islamophobia through their sheer laicite, but everyone else knows the emperor is naked.

Oh, France! we all cry out.

But Americans need not jump to judgement too fast. In Muslim American Women on Campus, I discuss how even non-hijab-wearing U.S. Muslim college women were othered for such attempts at modest clothing as long sleeves and long skirts. See below:

An excerpt from Chapter 4: “You Can’t Really Look Normal and Dress Modestly: Muslim Women and Their Clothes on Campus” follows:

Religiously observant non-hijabis typically seek a midpoint between normal American and Muslim dress: this usually involves wearing no hijab; modest necklines, long sleeves, and long pants to cover skin; and clothes of a loose fit to cover one’s bodily contours. Stylish layers such as jackets were in common usage to cover the chest and buttocks, but also to counteract the single baggy layer appearance. Hijab certainly is not the measure of modesty or dowdiness. As the trends of “hijab chic” and “sexy hijab” have grown in popularity, I have observed, on the one hand, hijabis wearing daringly skin-tight jeans and shirts, even low-cut necklines, coupled with minimalist headscarves, and non-hijabis, on the other hand, wearing loose clothes and bulky hoodies.

But even non-hijabis who wore modest “American” dress could not escape othering. It was no surprise that for Heather, a recent convert, “the biggest thing”—the greatest challenge—was her Muslim wardrobe.

Heather: Because you can’t really look normal and dress modestly. . . . You can pull it off to some degree. But you’ll never—[trails off]. . . . There are definite barriers between being religious and being normal in society. And you can make up to a certain degree with personality or knowledge of popular culture—or being interested in having a fun time that’s not necessarily haraam or something, but—[trails off].

On a summer day, Heather stood among her peers in their short skirts and lacy tank tops. In a woven long-sleeved shirt and an ankle-length Gap denim skirt, Heather’s skin was conspicuous by its absence.

Heather tried to prevent such encounters by strategically planning outfits, though she remained dissatisfied with the partial conformity that resulted.

Heather: And so, definitely this summer I’m a lot more inclined to wear, like, light-looking things or things that might fit in a little more—like, skirts that don’t look like they’re hot, or pants that just look like khakis. Because you can sort of get away with wearing khakis in the summer and nobody’s going to ask you “Are you hot?” for the most part. Because at least you’re like–you know, it’s a legitimate thing to wear. The problem is when people wear long skirts or long pants they normally wear, like, a tank top on top.

Heather could “get away with” khakis and long skirts but when not paired with tank tops, this alternative to skin-baring summer fashion marked her as hot, weird, and oppressed. With her modest attire, Heather would never be perfectly normal or free from the pressure to defend her clothing choices.

Check out the video and report on my lecture at the International Institute of Islamic Thought this past week.

The gang rape of a young woman on a crowded Florida beach within feet of hundreds of spring breakers should be a surprise only to those who are completely out of touch with a) the misogyny and sexism in our culture and b) the rampant hedonism of youth culture. While we hold the perpetrators responsible, let us hold ourselves responsible, too, for marketing and for consuming wanton misogyny and for perpetuating the same. Let us also hold responsible the hedonism market that freely and viciously exploits youthful appetites and objectifies women’s bodies for the sole purpose of making profits.

Since the late 1960s, when universities relinquished the in loco parentis role, sociability and hedonism have grown ubiquitous in higher education … Sociability and hedonism, which play central roles in the marketing of college brands, are manufactured and indulged in by college undergraduates.

In American popular culture, college—at the corner of adolescence and adulthood—represents a selective mimicry of “adult” hedonistic behaviors combined with youthful imprudence. Undergraduates are customarily described as being frivolous, “‘drowning’ in a campus sea of secularism, hedonism, and materialism” (Magolda and Gross 2009: 315), and immersed in an “anti-intellectual student ethos” (Renn and Arnold 2003: 263). Getting trashed, flirting with abandon, (aspiring to) wild promiscuity, cutting classes—these are all familiar tropes that popularly represent the college years in the popular imagination (CoEd Staff 2008).

Peer culture constitutes marginality for many who are ugly, uncool, frumpy, unpopular, nonwhite, foreign, or poor. With important regional and rural-urban variations, “cool” students are (or seem) mellow or blasé in relation to, well, everything: academic work, sex, religion, morality, politics, and regulations—everything except having a good time. Nothing is supposed to faze normal youth, and certainly not a judicious measure of debauchery. If you were significantly disengaged from such “normal” youth behaviors, you would be marked as “different.”